It’d be easy to write a whole post about the scenery of Split, Croatia. It’s absolutely, insanely beautiful. But to be honest, I spent almost two years of my life blabbering on about scenery for a travel magazine and I’m quite sick of that shit. The flora and fauna blah dee blah dee blah. Instead, this is a retelling of one of the most magical nights of my trip to convince you all that you must pay Croatia a visit regardless of your interest in natural beauty.

Since a tan in Scotland is a rarity, I must admit I did spend the whole of my first three days in the city lying on beaches reading Trainspotting, and snacking on pizza and squid. I also ate some incredible veggie and vegan food—Marta’s Fusion for those of you looking for vegan food was wicked—and consumed a load of banana sorbet. But good eats aside the beaches were bomb.

On the bottom side of Marjan, a huge green space for hiking in the middle of Split, is a wee swimming spot called Bene Beach. It’s not just beautiful because of it’s crystal clear turquoise water (yuh can take the lassie outta travel writing but yuh can’t take the travel writing oot the lassie), but it’s also beautiful in its relative desolation. The other two beaches I visited were packed with plenty of beach-goers but for some reason this spot, with the best views, was the most private. There were areas a bit off from the main point of the beach that were completely human-free. I picked a rock, sat my arse down, and wrote the first poem I’d written in ages. Solitude and ocean air always make me feel creative.

Cut to day three. I had spent the majority of the day on Split’s only sandy beach—I wouldn’t recommend it, so crowded and covered in litter sadly. Because I had been foregoing party nights since arriving I decided to head home for a shower and a pick me up coffee before finding a cool drinking and dancing spot.

When I arrived back at my hostel I met a group of seven people from Germany who had all just finished a week-long sailing extravaganza around the Croatian islands. They expressed to me how tired they were but how stoked they were to spend their last night partying.

So I invited myself out.

The first part of the night was alright. I felt a bit out of place and a bit bad for intruding on their last night together and also felt guilty for not speaking any German, but it was a nice little sandwich and beer by-the-sea supper regardless. When we went for a post-dinner coffee, I was convinced the group were too tired to go for a boogie but I ordered a gin and tonic anyway and reminded myself that dancing alone was equally as fun as dancing with others.

On our way back to the hostel we stumbled upon a man playing and singing popular tunes with his guitar in the square of Diocletian’s Palace (an old structure used in the show Game of Thrones that takes up a large portion of space in the old town). Until about midnight we danced and sang along with the 50 or so others in the square as it rained on and off. There was some salsa, some line dancing, and some straight Elaine Benes-style nonsense going down; I loved every minute of it.

​​​​​
After capping off the tunes with the likes of Have You Ever Seen the Rain, Always Look on the Bright Side of Life, and Hey Jude, all of us getting down in the square left in the same direction, collectively searching for more music.

As we entered into an echo-y dome located beside the square, one woman started to sing. We slowly turned to look at her and then all of a sudden at least 10 other women chimed in with all manner of harmonies. These tunes included Amazing Grace, Dancing Queen, and All About the Bass. The dancing and debauchery resumed until the women’s choir (apparently from Sloveinia) packed it in and headed off.

​​
We finished the night at a spot called Academia Club Ghetto, where glasses of 85% absinthe were being set alight, a haze of cigarette smoke carpeted the dance floor, and a French DJ was mixing techno beats with live oboe playing. Oh how I danced. The music was so good my mates and I stayed at the bar for a good few hours before my feet started to swell and I had to call it.

​​
When I left, the DJ was playing a mashup of tribal tunes, Irish folk music, and again techno beats to round it off. Needless to say, I was pretty damned impressed. You know you’re in for a ride when a man with a huge grey beard wearing gothic clothes in his early 70’s tells you he’s the owner and grabs your arms to admire your tattoos. Well that, and the absinthe thing.

The lesson here? Music brings us all together and strangers make the best dance partners. When I travel solo in the future, seeking out live music in town will now be my sure-fire way to meet new faces. Split, thanks for the incredible memories and major nose freckles.

Right by the Port of Split 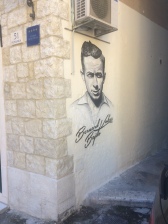 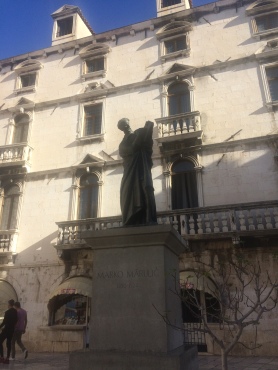 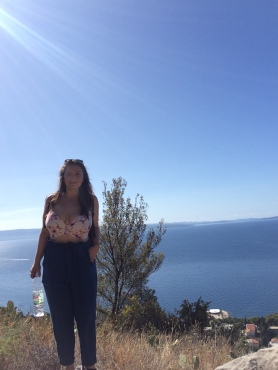 I set my phone on a timer to take this. When I went to pick the phone up I had a thought of how stupid I was for walking willy nilly in the forest to the cliff to get this shot. There’s some poisonous ass snakes in Croatia and I’m a baby. 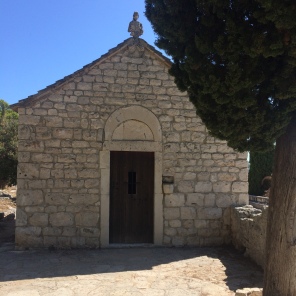 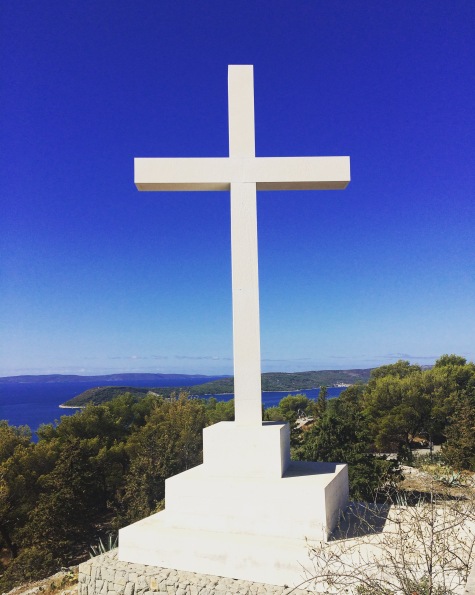 My spot on Bene Beach 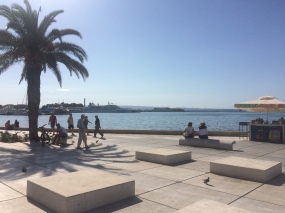